You’ve likely seen the posts on Facebook or elsewhere. “Well, another day has passed and I still haven’t used Algebra once!” A Google search of this sentence turns up many images, including those of T-shirts and at least one tote bag. Go ahead. Copy and paste the image below. You’ll likely garner several LOL’s. 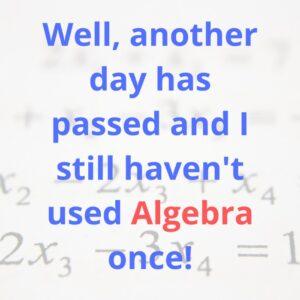 But is this a statement you really want to make? How would you feel about posting: “Well, another day has passed and I still haven’t read anything”? We frequently hear, “I’m not a math person.” Do we ever hear, “I’m not a language person.” We’re a culture that values literacy — at least being able to decode words from a page. However, mathematical inability seems to be something to be proud of, or at least to post to Facebook or on a tote bag.

Can you blame anyone, though, who shows apathy — or even hostility — towards mathematics? I overheard a sixth standard teacher confide to a colleague that she didn’t think the math she was teaching us was worthwhile, since we could use calculators and smartphones.

If your teacher passes on the notion that mathematics education is a necessary evil, it will stick with you. I see students today instinctively reaching for the calculators in their smartphones at the slightest whiff of any number. Imagine reading a novel, and having to look up every other word in the dictionary. How well would you follow the story?

If I had my way — which I won’t, but if I did — I would overhaul mathematics education, at least at the high school level. I would like to see removed those textbook pseudo-applications which try to show with such fervor that, yes, Ramesh, you do need this because someday you might have to calculate Sarita’s age if she is three times the age of her sister, and in one year she’ll be twice her age.

Next, I would like to see as much time spent on famous mathematical problems — solved and unsolved — where the use of the mathematics is in understanding what was and is at stake, and why the mathematics community gets excited about the Riemann Hypothesis. I’m talking about a pure maths approach, over a forced applied maths. Because, no, you will probably never ever use the quadratic formula after you shake the dust off your feet on your way out the door from your final high school maths class.

Mathematics is an art-form. Sure, not everyone will become a professional mathematician. Not everyone will become a professional writer or actor or musician. But students read novels, perform plays, and play music. Punching out a memorized formula on a machine is no more doing mathematics than hitting play on a music app to play your favourite song.

So, let’s slow down and let students learn that mathematics is about playing with ideas. The most musical sound to a teacher’s ears is hearing a student say, “What if?” What if we drew a line here? What if rotated the figure? Or reflected it along this line? Yet we rob students of the exhilaration of discovery. We have no time for this. We need to finish these exercises and move on to the next topic, because we have a test next week.

Mathematics is less about ensuring that your answer matches the one in the back of the book than it is about the process. And a wrong solution is a beautiful thing, because it gives the opportunity to trouble-shoot, and learn why the solution went astray. Why did the graph behave that way? When the question has parts (a), (b) and (c), don’t stop there. Invent a part (d). Suck the marrow out of every problem. Present your findings to the class. Learning to express yourself mathematically, if only to frame a question, has tremendous pedagogical value.

I doubt anyone really lives their life without algebra. Not if they’ve ever shopped for groceries, doubled a recipe, planned a road trip, tried on pants,…. We all do these things and even knowing what to punch into the calculator requires an intuitive understanding of algebra. The truth behind the meme is that students come out of high school thinking algebra is about the mindless manipulation of symbols.

What we need — more than anything — is a change of mindset. Let’s give our young people an opportunity to play with numbers and polygons, without the pressure of having to perform. It’s okay — in fact, encouraged — to stumble and fall. You won’t break the formula if you try to factor it this way. See what happens.

Very few will become professional mathematicians, but anyone can become a math person.

We may have to live with C19 for months or years. Don’t deny or panic. Don’t…

The term millennial is a collective label given to individuals born between 1982 and 2004. Other…

Hindi/Hindustani has many forms of saying ‘you‘. Had an interesting discussion with an elderly on this topic.…

What is Blockchain? If this technology is so complex, why call it “blockchain?” At its most…