The Great Secret: The Classified World War II Disaster that Launched the War on Cancer by Jennet Conant 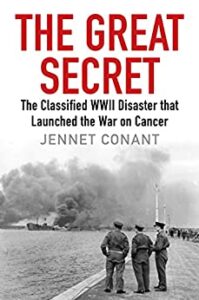 On 2 December 1943, German forces attacked the Italian port town of Bari. The onslaught cost at least 1,000 lives and sunk 17 ships. One was carrying 2,000 bombs loaded with deadly mustard gas.

The gas — which was actually in liquid form — mixed with oil from the sinking tankers to create a deadly slick that clung to sailors’ skin as they swam to safety. Many who made it to the local hospital were greeted with blankets to wrap around their poison-soaked clothing, sealing their fate as they awaited care. The agony set in hours or days later. Stunned nurses found themselves with wards full of swollen, blistered patients, temporarily blinded.

The Great Secret brings that harrowing night to life, and then follows the military physician who fought to uncover the truth about the chemical weapons. His efforts contributed to the development of chemotherapy, seeding the cancer-research juggernaut that dominates drug discovery to this day, argues writer Jennet Conant in her latest history of war-era science.

That hard-working and brilliant physician is the first of the book’s two heroes. Stewart Alexander, an American expert on chemical weapons, is called in to explain the mysterious ailments plaguing the Bari survivors. The possibilities offer a harrowing tour through the chemical arms race of the early twentieth century. Could it have been chlorine or mustard, the causes of the chemical massacres of the First World War? Or was it lewisite, a blistering agent that quickly penetrated the skin? Or one of the new blends such as ‘Winterlost’, a combination of nitrogen mustard and lewisite that featured a low freezing point to ensure effectiveness at the frigid Russian front?

The deadly cargo in Bari’s harbour was a fiercely guarded secret. The Geneva Protocol had banned the use of chemical warfare in 1925, but the shipment was there in case of the need to retaliate if Hitler had resorted to chemical weapons. Alexander struggles to treat his ailing patients while battling military officials who are intent on keeping the incident quiet. 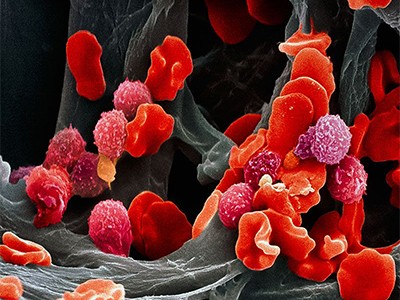 The return of cancer’s magic bullet

Alexander is struck by how the mustard–oil mixture obliterated his patients’ white blood cells. He scrambles to make sense of data from different treatments given in different hospitals, with different standards of care and no control groups. (There are uncomfortable parallels with the flurry of uninterpretable observational studies and uncontrolled clinical trials during the first months of the COVID‑19 pandemic.)

Alexander had seen similar effects of such agents in animal studies before the war. These had conjured up hopes that the chemicals could be used to rein in cancerous blood cells in leukaemia and lymphoma. Flood the body with toxic substances, the theory went, and the disease could be snuffed out or at least beaten back. Alexander’s detailed report of his findings in Bari, initially classified but circulated among some military researchers, spurred efforts to find a chemical treatment for cancer.

On this point, Conant has to labour to connect the dots. The inspiration for chemotherapy did not come from Bari. Yale University researchers in New Haven, Connecticut, first treated cancer with nitrogen mustard in 1942; the patient died of lymphosarcoma a year before the Germans attacked the Italian harbour. But Conant argues that Alexander’s report of his observations helped to convince researchers of the value and robustness of the approach.

The book’s second protagonist is physician Cornelius ‘Dusty’ Rhoads. He is much harder to like. Fiercely driven and passionate about curing cancer, Rhoads oversold preliminary research results and rushed into clinical trials. Before the war, Rhoads worked at Rockefeller University in New York City, and he travelled to Puerto Rico to study conditions such as anaemia and tropical sprue. There, he penned a hideously racist letter — unsent but discovered by his office staff — claiming to have transplanted cancer cells into healthy Puerto Ricans, whom he compared to animals. Rhoads later said the claim was a joke; subsequent investigations found no evidence that he carried out such “experiments”.

Nevertheless, Rhoads continued to wield significant influence in military and academic science. He applied that influence with full force to the search for chemotherapies. Scepticism from other physicians was rampant. Cancer treatment, Conant reminds us, had changed little since Hippocrates (460–370 bc) named the disease and proclaimed “what drugs will not cure, the knife will”. Surgery and radiation were nearly the only options, and cancer was so lethal and stigmatized that patients often were not told of their diagnosis.

After the war, Rhoads advocated fiercely for chemotherapy — inspired in part by Alexander’s report, Conant argues. Rhoads’s leadership and aggressive fundraising led, by the mid-1950s, to the first large-scale efforts to screen for new cancer drugs and to test promising candidates in people. Conant brings to life the exhilaration and hope that physicians felt when the first patients responded to chemotherapy — followed by the heart-wrenching dismay when, time and again, initial success was followed a few weeks or months later by the cancer’s resurgence. 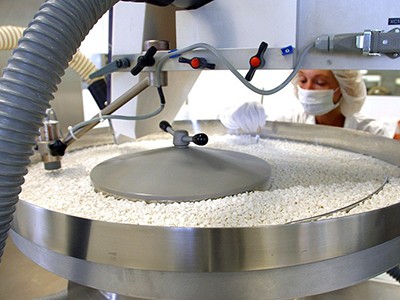 Opponents were horrified by the toxicity of chemotherapies and unimpressed by the ephemeral reprieves that most offered. US physician William Woglom captured the challenge: “It is almost, not quite, but almost as hard as finding some agent that will dissolve away the left ear, say, but leave the right ear unharmed; so slight is the difference between the cancer cell and its normal ancestor.”

Despite that challenge, Rhoads planted the seeds for the cancer-research enterprise that continues today. There are now reams of DNA sequence data detailing the genetic differences between our ‘left and right ears’. Drug-screening efforts are more sophisticated, and the chemical libraries that they trawl are orders of magnitude larger and more complex.

For a science-hungry reader, The Great Secret has a few too many excursions into the strategies, personalities and troop movements of the Second World War. And I yearned for more on the development of ethical boundaries between experimentation and treatment, which remain fuzzy in cancer research. But the book succeeds as a history of chemotherapy’s origins.

Measurement of human performance at work, has since times immemorial, been a crucial process to ensure…

Outliers: The Story of Success

ONE SENTENCE SUMMARY Only people who manage their lives according to reality and reason, and who…