“Battery Target”, the OP (Observation Post) officer nominated shouted and ran in as if something was on fire. For the checkered lot sitting on the OP, it did not disturb their sensibilities. For all had to go through that routine. It was a way of showing urgency. To whom? Obviously to the enemy, sitting in the Avatar of the IG (Instructor Gunnery) at the OP. This scene is usually similar in any course shootings (A firing exercise carried out in the field firing ranges to train the artillery personnel). This time it was a course shooting in the Deolali, Field Firing ranges, and the occasion was the award of the best OP officer of the running Advance Gunnery Course. (Course attended by Artillery officers between five to eight years of service).

The OP officer was amongst one of the six selected to be tested. He was unfortunate that apart from his IG, his SI (Senior Instructor), the Commander Gunnery Wing also landed up to witness the course shooting. It wasn’t surprising that Captain Dushyant Singh (Name changed) ran so fast that he appeared to have dived into the OP pit. Luckily there was a camouflage net on it, and his trajectory seems controlled as he neared the pit. But it was evident that he had left in a hurry, for his tools were left behind as a telltale sign of his panic. His map, his protector and the target map fan, were left behind as if they had no business to come in between his task of taking a shoot. After a brief silence, Capt Dushyant carried out the drill with the OPA (OP assistant; called the OP ac): of whether he has seen the target, and if yes, then he should find out the location ( Grid reference). After another five minutes after the OP officers orders were passed to the guns, the OP officer started his assessment and method of engaging the target.

“What was the target size and description given to you Capt Dushyant,” the IG asked. “Sir, the description was an enemy forward assembly area, and the size was around 450 by 450 meters,” Capt Dushyant replied innocently. “Then why the battery target, you have a regiment available to you to fire,” questioned the IG. There was a long silence from the OP pit, and one could make out that there was a hush hush discussion taking place between the two souls pitched inside the OP pit. After what appeared to be a whole minute of silence came the reply, “ Sir, I will change the Initial orders.” “ Do it,” responded the IG. Cancel “Battery Target”, and after a pause followed “Mike Target,” followed by the same Initial orders. Now for the fire discipline purist, this was a sacrilege. Everyone knew that a fresh ‘Nature of Target’ (Mike Target, in this case) would have superseded the last order. So, while the OP officer was trying to get his act together there was this animated discussion as to how such a basic fire discipline mistake must be charged two beer bottles and not one.

“Checking back the target, sir,” shouted the OP officer. Target right two o’clock, two degrees three zero minutes, a prominent green tree. There was this awkward silence. Firstly, there was no such tree at 2 O’clock and secondly, if he meant a tree, then there were numerous in the right of the target, and they were all green. The IG was now nervous for somehow this Shoot was becoming more a test for him than the OP officer. “Dushyant, check back with some other landmark, the IG said. By now he had dispensed with addressing the OP officers rank, more out of nervousness than any attempt to lighten the atmosphere. Capt Dushyant was now sweating in the OP pit despite the cool Deolali breeze that hits the ranges in Monsoon season. “Sir, checking back the target, reference target left 9 O’clock three degrees a black stone.” By now the Commander who was watching the fun could take it no longer, and commented, “Dushyant in the 450 meters of your target there are hundreds of stones, so the least you can do is let us know from which part of the target are you checking back”. By now Dushyant had forgotten which side was the East or North and his entire bearings. He realised that he had faltered. “Sir, can I use the ‘Pointer staff’ to indicate the ranging point and that way I can show the target,” said Dushyant in a last bid attempt to salvage the situation. Everyone was quiet. No one wanted to take the call, as pointer staff was used only in the training academies. As Artillery officers, there was no practice of using it. Moreover, since the last comment was made by the Commander everyone was now looking at him. Finally, the old foggy realised that all were waiting for him to take the call. He said, Ok, show it to your IG. 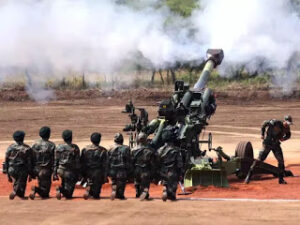 The IG was pretty sure that Dushyant has got the target wrong, but didn’t have the heart to bring it out. The Commander was no fool, and the SI suspected he too had understood from the body language of the two people involved that the indication had not gone as desired. Still, he thought it wise to keep quiet. Since a fair amount of time had passed everyone was keen to start the Shoot. After an eternity came the report on the radio set: ‘23, Shot 3, over’ indicating that Pappa Battery( The first battery of an artillery regiment) was the ranging battery and the Number 3 gun was the ranging gun, and it has fired a round. The OP assistant shouted ‘stand by’, and all were trying to focus the binoculars on the target as they knew it. What followed was utter silence followed by a muffled sound of a shell burst. But no one could see anything. After about 5 seconds, on the right side, some black smoke rose from behind the mound to be seen by only a few who were not using their binos. Once again, there was pin-drop silence. No one dare speak. The IG himself had not seen the round as it was nowhere near the target. By now the SI who was a Colonel and experienced in matters at the administration of tense situations (Ghoota hua) decided to take charge before the Commander could lose his cool and asked, “what is your observation?” Sir my observation is ‘Short Right 7degrees’, replied one amongst the checkered lot, hoping to make an impression. “I am asking the OP officer,” the SI retorted. Dushyant who was hearing this conversation with stretched ears had a getaway answer, having missed the fall of shot and consequent observation of the first round. “Sir, my observation is ‘Short Right 8 degrees’,” replied Dushyant confidently. Having got a clue, it was the first time that he realised which was his target and the possible centre point. Now it was easy picking for Dushyant. He passed the next order, “left 400 Add 650.” “Why 650, have you not violated the rules of ranging?” Asked an equally nervous SI. After another pregnant pause, the OP officer replied, “Sir, this is an advanced shooting procedure taught in the Advance Gunnery course of plotting the round on the map and deducing the target grid corrections.” SI was more relieved than aggrieved that the OP officer has at least thought of a reasonable answer. Both the Commander and the IGIC who were wondering, how the hell has he plotted the round on the map when his map is lying in its original place in the course shooting seating stand? The Commander was laughing his guts out inside, remembering his good old days but didn’t say a word.

Everyone was now waiting with bated breath for the next round. Finally, the radio buzzed; ‘23 shot 3’, followed by ‘Stand by’ from the OP ac. Following five seconds, what everyone saw will ever remain ever etched in their memory. The ranging point (Point where the Guns are directed to fire) in this case also the centre point, was a prominent thick hull-down tree. The round land right on top, and all could see the trunk of the tree went flying in one direction. ‘1 RGF (One Round Gunfire) ordered Capt Dushyant, announcing loudly, “target round, sir.” The IG and the SI were almost on the verge of applauding Capt Dushyant, so thrilled they were with the outcome of the Shoot. Dushyant was asked to come out and in trooped the victorious OP officer. His body language had taken a 180-degree flip. He was now taking cool, confident steps towards the seating stand. That day if Capt Dushyant had committed any sin before or during the Shoot, they were all forgotten, in the ‘end of shoot’ comments. He was the ‘Man of the Match’.

The Commander was already laughing his way to the car. He had seen the best of them at work..

The Fine Art of Losing Friends

Hindi/Hindustani has many forms of saying ‘you‘. Had an interesting discussion with an elderly on this topic.…