The grim picture of the Indian education system is evident when results of the board exams are declared. On one side we have sky-high marks being scored by students and on the other side we have some suicides by failing students. Last year a lady’s post caught the attention on social media when she proudly declared that her son had scored 60% marks in the CBSE class 10th examination. The Annual Status of Education Report (ASER) of 2018 indicates that 75% class 3 students in government school across the nation cannot read and perform basic calculations. He speaks about how the Indian education system is creating rote learners, unemployable and unskilled graduates.

The shiny-black-minimalistic cover of the book forces you to pick it up from the bookshelf and one’s eyes are drawn straight to short messages on the book cover – … a must read – Amish Tripathi. The author is of the view that “most of our current practices of education are dangerously outdated and we need to bring a paradigm shift in the way we are preparing ourselves for the coming future”. This is the key idea of the book and the Ashish assimilates lessons from the approach applied by geniuses throughout history and offers a fresh model of learning and thinking. 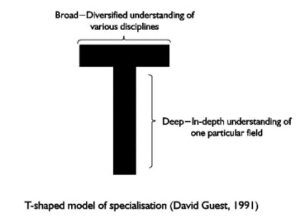 The book commences with a couple of anecdotes to highlight our discipline-centric approach to education. It explains the anti-fluidity of the current system of education. It says that we are driven by island-centric education – that is – we converge all our energy and intelligence to move in one direction only. Gaining expertise in a particular field is the main goal of our education. We are made to believe that being a “Jack of all Trades” is no good and in this age of specialisation it holds no value. This, the author calls, is the “T Shaped” model of specialisation where an individual should keep on acquiring in-depth knowledge in one particular discipline—represented by the long arm of the ‘T’.

Looking back into history, Ashish cites the examples of Charles Darwin, Aristotle, Leonardo Da Vinci, Goethe, Amartya Sen, CV Raman, Peter Geddes, Frank Lloyd Wright, Edwin Land, Steve Jobs, etc who did not follow a set path and explored the universe and exposed themselves to diverse fields of education. Some of these celebrities were world-famous artists as well as STEM (Science, Technology, Engineering and Mathematics) experts. Living in our own bubble we feel that Non-STEM subjects have little value. But if we look in the past, our myths are dispelled since most well-known architects, painters, mathematicians were absolutely amazing writers, painters, and poets too. This is the reality that challenges our rigid (non-fluid) approach to education. Our education system must be “fluid” meaning “be more than what you are taught to be”. 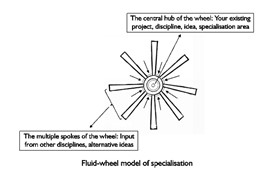 Ashish writes that the integrative nature of the final learning of a specialist is exactly like the charkha woven yarn, which encompasses all material into it. Hence, he termed his model as the “fluid-wheel”. Each specialist of a discipline should draw his/her own fluid-wheel. The central hub of the fluid-wheel can be imagined as an individual’s core specialisation area, whereas the spokes can represent all the various disciplines from which an individual can draw. The author goes on to give examples/samples of the fluid-wheel pertaining to some specilisations like “smart-city specialist”, “cardiologist” etc.

The author does not believe in the theory of “right-brain” and “left-brain” – wherein one type is suited for STEM and the other type for non-STEM subjects. He quotes Neil deGrasse Tyson, the American astrophysicist who says that “these fake divisions between science and art is taking our civilization away from true learning”.

An important finding of the author is that India should get credit for Da Vinci’s Vitruvian man. The undiscovered Hans Purush from Vishnudharmottaram Puranam mentioned by Rishi Markendeya was one of the perfect men discussed in the Purana. In fact, the author wants to stress the point that human knowledge is circulatory. The world has been benefited not by one single country or race but by the combined intelligence of all spread over the thousands of years. For example, the architectures around the world are the best example of combined intelligence and cultures of humanity. The best example mentioned by the author is our India Gate which not only incorporated western architectural influences but also the elements of Indian architecture in terms of the dome on the top and canopy structure in front.

The book has many examples including that of Prof CV Raman who was not only the pioneer of determining the effect of light as it passes through a transparent surface – but that he also was an expert Mridanga player. You are not only inspired by the various accounts of famous personalities but are motivated to apply them. Original letters, diagrams and illustrations make these applications that much easier to understand.

Ashish talks about the “Bronx High School of Science” in New York that has the distinction of producing the highest number of Nobel Prize winners in the world. In its eighty-year existence, the Bronx School has produced a total of eight Nobel Prize winners, including seven in Physics and one in Chemistry. Analysis of the Bronx School’s curriculum reveals that the students at Bronx not only study pure sciences but are also required to take compulsory courses in the social sciences, foreign languages, and fine arts. In addition, the school offers a staggering range of more than 160 distinct courses as electives to its students. In addition to the curriculum, he goes on to analyse the other activities that help create well rounded scholars at Bronx. Martin Chalfie, (Nobel Prize – Chemistry 2008), an alumnus of Bronx says, “The best training I received in college did not come only from my sciences courses, but from the social science and humanities courses I took”.

The book is an out-of-the-box thinking on education and the author has challenged the stereotypes existing in present day education and motivates us to confront the regressive education boundaries built by society, educators, and governments. In just 210 pages, the author has said many things which the reader might not be able to digest in one go. The rigidity of our present-day education system forces the reader to think “how can we inspire the stakeholders in education to be fluid in their approach”.

The book is a good read with its stories, ideas, anecdotes, and inspiration – Fluid is an experience everyone should experience.

Some Quotes from the Book

“Those who understand the Indian schooling system are well aware of its ‘double-faced’, two-track nature.”

“The educational journey of these wanderers inspires the idea of being fluid.”

“Great minds who have changed the fate of humankind are actually the ones who failed, faltered or remained uncertain, yet never bothered to stay to a rigid line. They were more. They were fluid.” 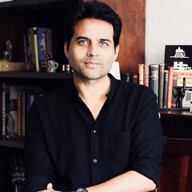 Ashish Jaiswal holds a doctorate and a master’s in the field of education from the University of Oxford and is currently a research fellow at the Oxford Centre for Higher Education Policy Studies (OxCHEPS). OxCHEPS is an Oxford based independent think tank that works on improving understanding of higher education. Ashish has spoken and taught all around the world on the shift needed. He advises schools, colleges, universities around the world on innovative curriculum and pedagogy. He writes for several publications, including The Guardian, India Today and The Hindu and has been covered by international media including BBC – Oxford, CKLN – Toronto, 33voices, USA, Gulf Today, UAE, NDTV, The Times of India, The Hindustan Times, The Asian Age and The Indian Express

What makes people tick? The Elephant in the Brain by Kevin Simler (Twitter) and Robin Hanson…

Book Review The People vs Tech is a racy 250 pages single sitting read. The single…

The Power of Habit | Charles Duhigg

About the Author Charles Duhigg is an awarding winning journalist and author of several books. Born…

Dune by Frank Herbert is a 1965 epic, where, Earth has been ravaged by a nuclear…