Mitchell served in France during World War I and, by the conflict’s end, commanded all American air combat units in that country. After the war, he was appointed deputy director of the Air Service and began advocating increased investment in air power, believing that this would prove vital in future wars. He argued particularly for the ability of bombers to sink battleships and organized a series of bombing runs against stationary ships designed to test the idea.

General “Billy” Mitchell did not suffer fools gladly. He had seen the future, and it was air power.

The day has passed when armies on the ground or navies on the sea can be the arbiter of a nation’s destiny in war. The main power of defense and the power of initiative against an enemy has passed to the air. ~November 1918

He knew the world must not be deluded into the belief that “the war to end all wars” had really achieved that outcome. “If a nation ambitious for universal conquest gets off to a ‘flying start’ in a war of the future,” he said, “it may be able to control the whole world more easily than a nation has controlled a continent in the past.”

After the war, Mitchell proselytized for the importance of air power. His forecast was heresy to the conventional war thinkers of his day. He even claimed an airplane could sink a battleship. Back then, in the era of the superdreadnought, aircraft were little more than motorized kites. Mitchell was laughed out of the room.

Mitchell was concerned that the building of battleships was taking precious defense dollars away from military aviation. He was convinced that a force of anti-shipping airplanes could defend a coastline with more economy than a combination of coastal guns and naval vessels. A thousand bombers could be built at the same cost as one battleship, and could sink that battleship. Mitchell infuriated the Navy by claiming he could sink ships “under war conditions”, and boasted he could prove it if he were permitted to bomb captured German battleships.

In February 1921, at the urging of Mitchell, who was anxious to test his theories of destruction of ships by aerial bombing, Secretary of War Newton Baker and Secretary of the Navy Josephus Daniels agreed to a series of joint Army-Navy exercises, known as Project B, to be held that summer in which surplus or captured ships could be used as targets.

Undeterred, he suggested that aircraft carriers should replace battleships, the long-reigning kings of the sea. In 1924, when he said this, only a stunt pilot would have considered landing a plane on a moving ship.

General John J. Pershing, perhaps to keep Mitchell out of further trouble, sent him on an inspection tour of the Pacific. Months later, he returned with a 525-page report, predicting war between Japan and the United States, initiated by a Japanese surprise attack from the air. Incredibly, he also predicted it would occur at Pearl Harbor. “Japan knows full well that the United States will probably enter the next war with the methods and weapons of the former war,” he wrote. “It also knows full well that the defense of the Hawaiian group is based on the island of Oahu and not on the defense of the whole group.” In other words, the Japanese needed to hit only one island to cripple America’s Pacific fleet.

The top brass already thought Mitchell was nuts, but this new assertion went too far. He was deemed insubordinate, a cardinal sin in the military. Some ideas, it seems, are too dangerous for consideration, especially when they regard the future of war.

His court-martial soon followed. Of the thirteen military judges, none had aviation experience; three were removed following the defense’s challenges for bias, including Major General Charles P. Summerall, the president of the court.

After thirty minutes of  deliberation, Mitchell was found guilty and suspended from the army without pay for five years. In disgust, he resigned. For the next decade, he preached tirelessly about the coming age of air war, when battles would be fought in the sky over who would rule continents. Many thought him an entertaining fruitcake.

Weakened by his struggle, the old campaigner died a decade later, in 1936, at the age of fifty-six. He elected to be buried in Milwaukee, his hometown, rather than at Arlington National Cemetery.

Five years later, the Japanese attacked Pearl Harbor by surprise, with airplanes. Within two hours, they sunk or damaged eight American warships, including the famed USS Arizona, destroyed 188 aircraft, and killed 2,403 people. The navy claimed it had been caught “completely by surprise,” and blamed an unscrupulous enemy for its failure. In reality, the 2,403 casualties were killed by groupthink as much as by Japanese bombs.

The United States and Japan went on to fight one of the biggest naval engagements in history, the Battle of Midway, entirely with aviation. Never did the two fleets see each other. When it was over, the aircraft carrier had supplanted the battleship as supreme on the ocean, just as Mitchell had foretold twenty years earlier. Mitchell saw the future, but no one believed him. Years after he died, the military did own up to its error, in its own way. It named a bomber after him. Billy Mitchell teaches us that changing strategic minds is difficult, especially when it comes to the future of war. The stakes are considerable and the dogma thick. People are not always ready to receive the future.

Mitchell received many honors following his death, including a commission by President Franklin D. Roosevelt as a Major General. He is also the first person for whom an American military aircraft design, the North American B-25 Mitchell, is named. Milwaukee Mitchell International Airport in Milwaukee, Wisconsin is also named after Mitchell. 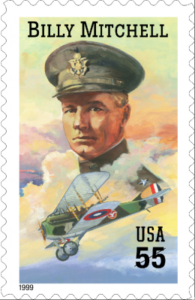 Which is more important, a fact or an opinion on any given subject? It might be…

When Tomorrow Starts, Without Me…!!

When tomorrow starts without me,and I'm not there to see,If the sun should rise and find…

Social cooling refers to the idea that if “you feel you are being watched, you change…