The book “Games Indians Play: Why We are the Way We Are” is an interesting read and it hits you within the first few pages where the author begins with a soliloquy of sorts (reproduced below).

Why is my sense of public hygiene so porcine? Why do I throw my garbage around with the gay abandon of an inebriated uncle flinging 500-rupee notes at a Punjabi wedding? Why do I spit with a free will, as if without that one right I would be a citizen of a lesser democracy? Why do I tear off a page from a library book, or write my name on the Taj Mahal’s walls? Why do I set a stadium aflame, or set a city bus or any other handy public property alight at the slightest provocation? Why do I toot my horn in a residential locality at 3 a.m.? Why don’t I leave a public toilet at least as clean as I found it, or at least nearly so; but instead leave it much worse and then complain of its abysmal state? Why don’t I contribute in any way to help maintain a beautiful public park? Why is my concern for quality in whatever I do Lilliputian in scope? Why are my canals, lakes, rivers and even streets choking with polyethylene? Why is my ambition or satisfaction threshold for anything at all below the level of a centipede’s belly button? Why do I run the tap full blast while shaving even when I know of the acute water shortage in the city? Why don’t I stop or slow down my car to allow a senior citizen or a child or a woman to cross the road? Why do I routinely jump out of my seat in a mad rush for the overhead baggage even before the aircraft comes to a halt, despite the repeated entreaties of the cabin crew? Why do I routinely disregard an airline’s announcement to board in orderly groups in accordance with seat numbers? Why does it not hurt my national pride that in international terminals abroad extra staff is appointed at gates from which flights to India are to depart? Why don’t I vote? Why don’t I stand up or retaliate against social ills? Why is it that every time the government announces a well-intended measure, such as a higher rate of interest for senior citizens, I am not averse to borrowing my ageing parents’ names, or the old family maid’s for that matter, to earn those additional basis points? Why is it that every time the government announces no tax deduction at source for small depositors, I split my bank deposit into fifteen different accounts, with the active connivance of the bank manager? Why do I drive on the wrong side of the road nonchalantly? Why do I jump red lights with the alacrity of a jackrabbit leaping ahead of buckshot? Why do I block the left lane, when my intention is to turn right? Or vice versa? Why do I overtake from the left? Why don’t I stick to my lane, instead of zigzagging? Why do I drive at night in the city with the high beam on? Why do I jump queues like an Olympic heptathlon gold hopeful?

These are everyday behaviours of common Indians around us and has set many of us thinking at times – why do we behave like we do. We have tried to attribute various reasons for such behaviour like education, upbringing, couldn’t care less attitude etc etc. The author, given his background, uses Game Theory, a branch of mathematics for decision making in competitive scenarios to explain our behaviour. For me, being a maths major and having studied Game Theory was a good enough reason to pick this book to see the authors point of view.

The first chapter “The way we are” sets the stage for the book where he discusses various observations on behavioural traits attributed to us as a population. He draws upon the views of various authors like Richard Nisbett in “The Geography of Thought: How Asians and Westerners Think Differently . . . and Why” and V.S. Naipaul in his “India: A Wounded Civilization”. As per Raghunathan, these authors have made observations without explaining the reasons for the same. Hence, he sets about his quest to find reasons for the said behaviours. He examines various reasons like climate, population density, poverty, literacy, genetics, colonial rule etc and quickly rules them out due to contradictory evidence in similar demographics and other geographical areas. He also compares our performance as a people in key projects like Konkan Railway, Delhi Metro, Kolkata metro with similar or more challenging projects executed in China. Later in the chapter he lay down the hard hitting “13 cannons of Indianness” – (1) Low trustworthiness (2) Lack of self-regulation and sense of fairness (3) Being privately smart and publicly dumb (4) Being too intelligent for our own good (5) Fatalist outlook (6) Abysmal sense of public hygiene and public aesthetics (7) Reluctance to penalize wrong conduct in others (8) Deep-rooted corruption and a flair for free riding (9) Inability to follow or implement systems (10) A sense of self-worth that is massaged only if we have the ‘authority’ to break rules (11) Propensity to look for loopholes in laws (12) Mistaking talk for action (13) Acting only when we hit the absolute rock bottom of anything at all. He thus lays down the groundwork to offer and explanation based on Game Theory, specifically “Prisoners Dilemma”. 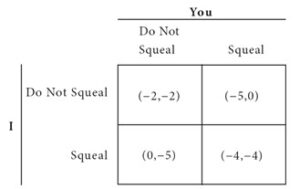 There are two accomplices in some suspected crime, who are caught by the law. Both prisoners are assumed to be entirely selfish, in that each wants to minimize their sentence. The law puts them in separate cells, leaving them incommunicado. Each is offered a plea-bargaining opportunity. If one cooperates with the law (that is squeals on the accomplice), one will go scot free while the other will get 5 years behind bars. If neither cooperate i.e. don not squeal on the other, each gets only 2 Years. But if each defects i.e. squeal on the other, each gets 4 years. So here is the dilemma: should one squeal against the other? The author explains the dilemma as given below:

As rational and intelligent beings each of us would argue thus: ‘If he decides to squeal on me, it is best that I squeal too. Why should the scoundrel romp home free while I get the slammer for five years? On the other hand, if he, the fool, is naive enough not to squeal, it is in my best interest to squeal and romp home free while he is free to enjoy his stay behind the bars.’ So no matter what I do, your ‘rational’ choice is to squeal. So you squeal. I, on my part following a similar trail of thought cannot trump that logic either and so I do ditto, and squeal. The squeal-squeal decision earns both of us four years in the slammer. But if we had chosen not to squeal, we would have served only two years each. It is obvious that in order ‘not to squeal’ one need not be driven by higher-order values like friendship, kindness or altruism. ‘Do not squeal’, in fact, turns out to be the superior option even if we are supremely selfish and rational, though hardly a convincing one when you are one of the prisoners in dilemma.

As per the author, rational thinking and intelligence go hand in hand. Indians are intelligent but we use much of our intelligence trying to figure ways to circumvent every law, regulation and norm in a bid to do better for ourselves; the other be damned. Hence we are like the prisoners in the Prisoners Dilemma who act in their self interest and not for the common good.

The author provides many examples wherein most Indians largely would defect (in Prisoners Dilemma terminology) for selfish gains rather than cooperate for the common greater good.

“When I jump a queue or a red light, or throw that garbage on the pavement, I am taking a rational ‘squeal’ decision, since it seems to put me at an advantage vis-à-vis others. Here I am being privately smart.”

Since we tend to deal or interact with the same people over and over again, the Iterative Prisoners Dilemma comes into play. The question then is what is the best strategy for one to derive maximum utility from the interactions, assuming for example, when two parties where both cooperate with each other, each derives a utility of 2 when one cooperates and the other defects, the defector gets 5 points while the cooperator gets -1 (because it stings to be cheated). But when both parties defect, neither gets any utility points. He uses the experiments of Robert Axelrod, a game theorist to indicate that Tit for Tat strategy is the best where you are never the first ever to defect; thereafter, do exactly what the opponent did the last time. In other words, you should always start with cooperation and continue cooperating till the other defects.

He associates many behaviours with Indians “defecting” like not delivering goods (on time), not delivering quality goods, not paying invoices, saying “What can I do?” to social problems, saying “What harm will it cause?” in civic issues like running red lights, and not showing care and concern for public areas.

The author also talks about the Crab in the bucket Syndrome where we behave like crabs in a bucket from where no crab would escape since any crab trying to get out of the bucket is sure to be pulled down by others inside. It is a reflection of dissatisfaction with others doing better than ourselves. We are perfectly happy if they do as badly as us, but cannot accept others doing well. We want parity with our neighbor or our competitor, no matter how.

The book’s culminating chapter is the relation between Game Theory & Gita wherein he discusses application of game theory to moral and political science. He is of the view that optimality self-policing social system can be achieved if the actions are driven by the Hindu notion of dharma. When both parties play by the rules of dharma, the Equilibrium achieved is truly and optimally for both.

If one has ever experienced any kind of frustration with India, it is easy to jump on the bandwagon and use this as your filter. There are a few areas where I really identified with the author’s thoughts based on my experiences. The area where I most agree with the author is that selfish individual decisions lead to a much worse situation for others at large. If more people would act in the interest of the larger good, many of these things would be taken care of. I found the book as interesting read.

Each chapter in the book commences with a short story. The story below summarises the essence of the book.

An anthropologist proposed a game to the African tribal children . . .

He placed a basket of sweets near a tree and made the children stand 100 metres away.

Then he announced that whoever reached first would get all the sweets in the basket. When he said, ‘Ready steady go!’ . . . What do you think the children did?

They all held each other’s hands, ran together towards the tree, divided the sweets equally among themselves, and ate the sweets. When the anthropologist asked them why they did so,

which is Nguni Bantu for, ‘How can one be happy when the others are sad?’

Also, Ubuntu means: I am because we are!

The United States Army in Vietnam was not a cohesive, functional organization, and most of its…

In a nutshell Human history has been shaped by three major revolutions: the Cognitive Revolution (70,000…

Outliers: The Story of Success

Measurement of human performance at work, has since times immemorial, been a crucial process to ensure…

Why we Sleep | Mathew Walker

The Book Review We all have done all-nighters at some point in our lives. Being a…