Once you have mastered the idea of points, lines and planes, the next thing to consider is what happens when two lines or rays meet at a point, creating an angle between them. Angles are used throughout geometry, to describe shapes such as polygons and polyhedrons, and to explain the behaviour of lines, so it’s a good idea to become familiar with some of the terminology, and how we measure and describe angles.

What is an Angle?

Angles are formed between two rays extending from a single point:

Angles are commonly drawn as an arc (part of a circle), as above.

Angles are measured in degrees, which is a measure of circularity, or rotation. A full rotation, which would bring you back to face in the same direction, is 360°. A half-circle is therefore 180°, and a quarter-circle, or right angle, is 90°.

Two or more angles on a straight line add up to 180°. In the diagram above, the circle to the left is split into three sectors the angles of the green and white sectors are both 90°, adding up to 180°.

The figure to the right shows that angles a and b also add up to 180°. When you look at the diagram like this, it’s easy to see this, but it’s also surprisingly easy to forget in practice.

An angle of exactly 180° is said to be straight. Angles greater than 180° are called reflex angles.

Different angles can be demonstrated on a clock face. The hour hand of the clock moves round as time passes through the day. The angle of the rotation is highlighted in green. 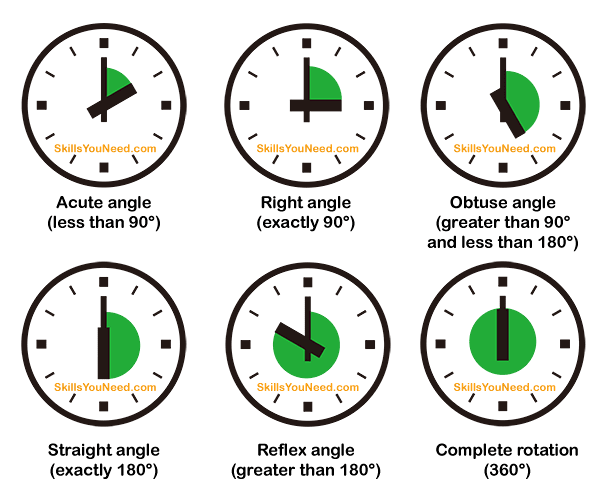 When two lines intersect, the opposite angles are equal. In this case, not only are a and a the same, but, of course, a and b add up to 180°.

Intersections with parallel lines: a bit of a special case

#01- Geometry Basics introduces the concept of parallel lines: lines that go on forever side by side and never cross, like railway lines.

The angles around any lines intersecting parallel lines also have some interesting properties.

If two parallel lines (A and B) are intersected by a third straight line (C), then the angle at which the intersecting line crosses will be the same for both parallel lines. 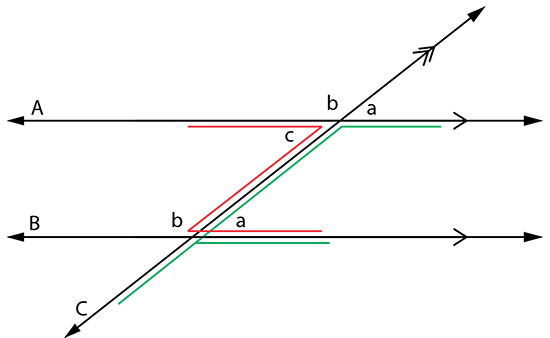 You will also immediately see that a and b add up to 180°, since they are on a straight line.

Angle c, which you will realise from the previous section is identical to a, is said to be alternate with a.

c and a are called z-angles, because if you follow the line from the top of c to the bottom of a, it forms the shape of a z (in red in the diagram above).

A protractor is commonly used to measure angles. Protractors are usually circular or semi-circular and made of transparent plastic, so that they can be placed over shapes drawn on a piece of paper, allowing you to take a measurement of the angle.

This example demonstrates how to use a protractor to measure the three angles of a triangle, but the same method applies to other shapes or any angles that you want to measure. 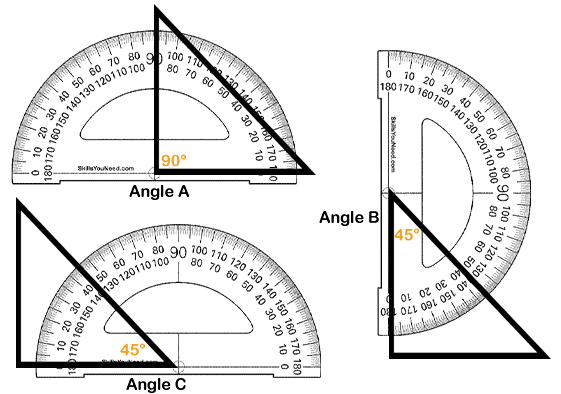 Pi (𝝅) is one of the most interesting numbers in mathematics. It is integral to our…

When you start studying geometry, it is important to know and understand some basic concepts. This…