When you start studying geometry, it is important to know and understand some basic concepts. This page will help you understand the concept of dimensions in geometry, and work out whether you are working in one, two or three dimensions. It also explains some of the basic terminology, and points you to other pages for more information.

Geometry, n. that part of mathematics which treats the properties of points, lines, surfaces and solids…

Geometry comes from the Greek meaning ‘earth measurement’ and is the visual study of shapes, sizes and patterns, and how they fit together in space.

We’re talking about shapes that are in one, two and three dimensions. That is, objects that have length (one dimension), length and width (two dimensions) and length, width and depth or height (three dimensions).

Points: A Special Case: No Dimensions

A point is a single location in space. It is often represented by a dot on the page, but actually has no real size or shape.

You cannot describe a point in terms of length, width or height, so it is therefore non-dimensional. However, a point may be described by coordinates. Coordinates do not define anything about the point other than its position in space, in relation to a reference point of known coordinates. Almost everything in geometry starts with a point, whether it’s a line, or a complicated three-dimensional shape.

A line is the shortest distance between two points. It has length, but no width, which makes it one-dimensional. Wherever two or more lines meet, or intersect, there is a point, and the two lines are said to share a point.

There are two kinds of lines: those that have a defined start- and endpoint and those that go on forever.

The second type of line is called a ray, and these go on forever. They are often drawn as a line starting from a point with an arrow on the other end:

There are two types of lines that are particularly interesting and/or useful in mathematics. Parallel lines never meet or intersect. They simply go on forever side by side, a bit like railway lines. The convention for showing that lines are parallel in a diagram is to add ‘feathers’, which look like arrowheads. 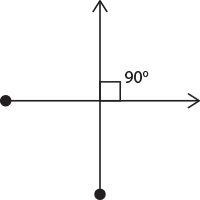 Now that we have dealt with one dimension, it’s time to move into two.

A plane is a flat surface, also known as two-dimensional. It is technically unbounded, which means that it goes on forever in any given direction and as such is impossible to draw on a page.

One of the key elements in geometry is how many dimensions you’re working in at any given time. If you are working in a single plane, then it’s either one (length) or two (length and width). With more than one plane, it must be three-dimensional, because height/depth is also involved.

Two-dimensional shapes include polygons such as squares, rectangles and triangles, which have straight lines and a point at each corner.

Finally, there are also three-dimensional shapes, such as cubes, spheres, pyramids and cylinders. 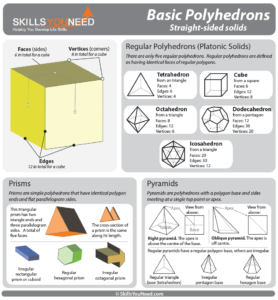 The shape illustrated here is an irregular pentagon, a five-sided polygon with different internal angles and line lengths. 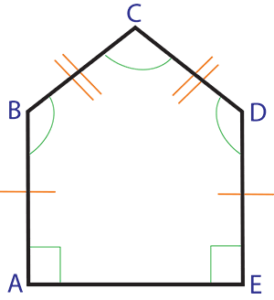 Degrees ° are a measure of rotation, and define the size of the angle between two sides.

Angles are commonly marked in geometry using a segment of a circle (an arc), unless they are a right angle when they are ‘squared off’. Angle marks are indicated in green in the example here.

Tick marks (shown in orange) indicate sides of a shape that have equal length (sides of a shape that are congruent or that match). The single lines show that the two vertical lines are the same length while the double lines show that the two diagonal lines are the same length. The bottom, horizontal, line in this example is a different length to the other 4 lines and therefore not marked. Tick marks can also be called ‘hatch marks’.

A vertex is the point where lines meet (lines are also referred to as rays or edges). The plural of vertex is vertices. In the example there are five vertices labelled A, B, C, D and E. Naming vertices with letters is common in geometry.

In a closed shape, such as in our example, mathematical convention states that the letters must always be in order in a clockwise or counter-clockwise direction. Our shape can be described ‘ABCDE’, but it would be incorrect to label the vertices so that the shape was ‘ADBEC’ for example. This may seem unimportant, but it is crucial in some complex situations to avoid confusion.

The angle symbol ‘∠’ is used as a shorthand symbol in geometry when describing an angle. The expression ∠ABC is shorthand to describe the angle between points A and C at point B. The middle letter in such expressions is always the vertex of the angle you are describing – the order of the sides is not important. ∠ABC is the same as ∠CBA, and both describe the vertex B in this example.

If you want to write the measured angle at point B in shorthand then you would use:

In our example we can also say:

Why Do These Concepts Matter?

In other words, you really need to understand the ideas on this page before you can move on to any other area of geometry.

Pi (𝝅) is one of the most interesting numbers in mathematics. It is integral to our…

Once you have mastered the idea of points, lines and planes, the next thing to consider is…